A DREAM OF LINNAEUS’ DAUGHTER 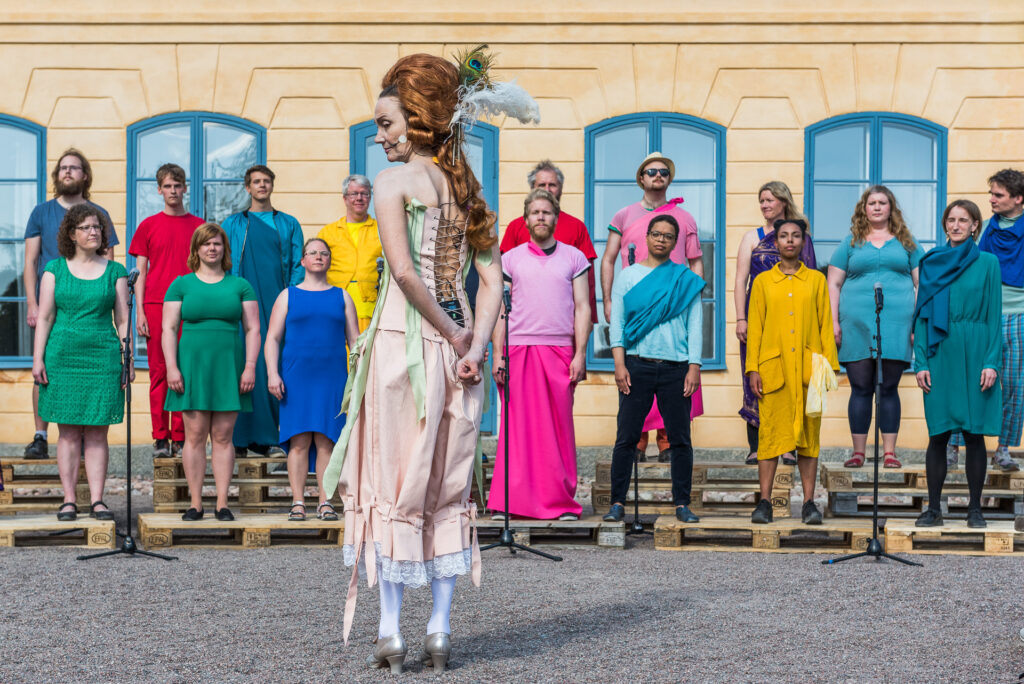 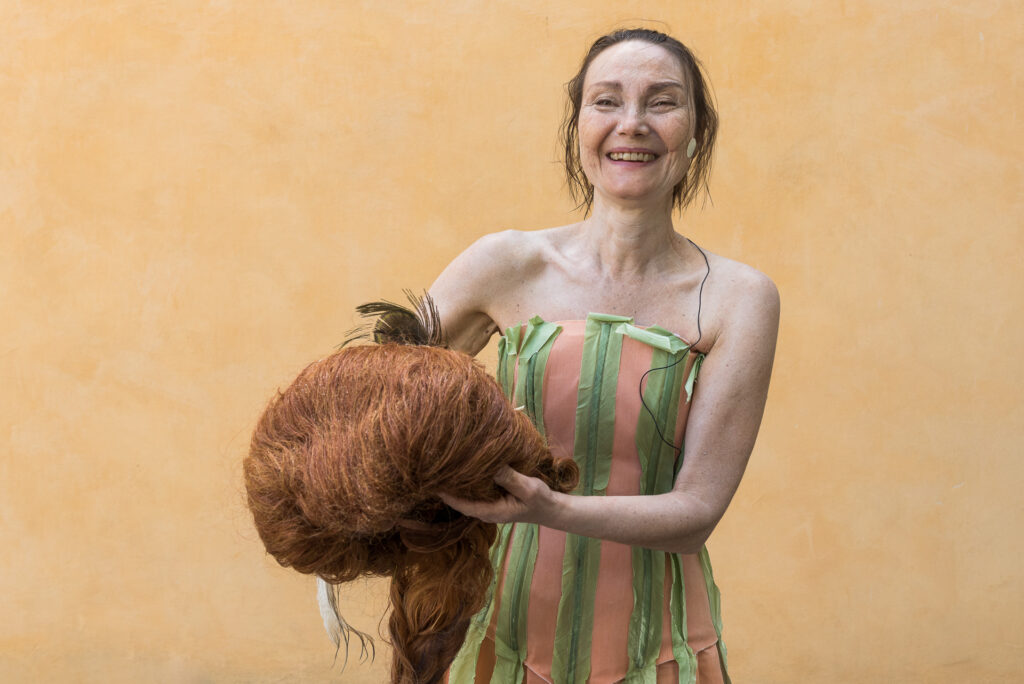 “Biology and evolutionary theory over the past two centuries have simultaneously produced modern organisms as objects of knowledge and reduced the line between humans and animals…”.
Cyborg Manifesto (1985)
Donna Haraway, biologist and feminist.
A Dream of Linnaeus’ Daughter was shot in Uppsala, in the gardens of Carl Linnaeus, famous Swedish botanist living in the 18th century who invented the classification system of organisms and the theory of sexual reproduction of plants, whose nomenclature derived from human sexual anatomy sparked universal outrage at the time. In her work, Kozyra acts as Elisabeth Christina von Linné, one of Linnaeus’ five daughters, an exceptionally talented figure forgotten by history, who could never take up studies, but still followed the steps of her father and became a botanist. In Kozyra’s interpretation, Elisabeth conducts a choir singing Ludwig van Beethoven’s famous Ode to Joy but… with the voices of such animals as a dog, donkey, cow, horse, goat and monkey. The creatures moo and squeal the anthem of the European Union while standing on typical pallets that symbolise Noah’s Ark. What an irony of fate: in Kozyra’s piece the daughter of the founder of an organism classification system based on difference builds a new world order that levels all differences, deeming all creatures equal.
The problematic of Kozyra’s work sits in the philosophical tradition of Donna Haraway, mentioned at the beginning, who describes a new society of the future that sees the blurring of borders between the sexes, species (humans and animals), biology and technology (organism and machine), between the physical and the non-physical. In a similar vein, from the beginning of her career Kozyra’s works have explored the boundaries between being a man and a woman, life and death, youth and old age, between the possible and the impossible. The latest projects that liken humans to animals – and vice versa: animals to humans – result therefore from the artist’s prior investigations. In a video and a photographic series “Lou Salomé” created at the Schwarzenberg Palace in Vienna, Kozyra plays the role of Lou Salomé – an intellectual and a femme fatal, friend of Friedrich Nietzsche, Sigmund Freud and Reiner Maria Rilke. In Kozyra’s interpretation, Nietzsche and Rilke are subjected to training as two dogs led on a leash by Salomé, again played by Kozyra, who walks them through the palace halls and takes them out to the gardens.

Kozyra follows Haraway’s path in proposing a new symbiosis between humans and animals. She approaches this topic from the perspective of radical feminism, as did Haraway, whose last manifesto The Companion Species Manifesto: Dogs, People, and Significant Otherness, devoted to human-canine relations, openly states that writing about dogs is for her a form of feminist theory. Also for Kozyra the notions of Culture and Nature are not necessarily a binary opposition. In photographs from the series “Homo Quadrupeds” naked men are led on a leash by burqa-clad women who tame their instincts. This is a reference to the legend of unicorn, in which only a virgin could tame the wild animal. While the women meet during the walk, the dogs sniff each other and seek to dominate. It is no longer only a matter of freeing women from male domination, as in the performance Aus der Mappe der Hündigkeit (From the Portfolio of Doggishness, 1968) by VALIE EXPORT and Peter Weibel, in which Weibel obediently waddled at the artist’s side. Kozyra expands the feminist approach with a political aspect: the dogs in her work, played by Arabs and Americans, are aggressive and ready to jump down each other’s throats any minute. Kozyra might therefore have more in common with Oleg Kulik, who attacks the establishment in his performances as a dog (literally!), but also dreams of a non-anthropocentric, ecological society and fights for democracy.

Kozyra expanded the borders of humanity to include other species already in her earliest works, such as the Polaroid series Karaski in Beef or her diploma piece Pyramid of Animals, inspired by the fairytale Town Musicians of Bremen by the Brothers Grimm, which consisted of stuffed animals: horse, dog, cat and rooster, accompanied by a horse slaughter film footage. At the time of its making, the piece stirred up an unprecedented scandal in the media, which turned it into the most famous artwork of the last quarter of the century and a symbol of critical art. Notably, Kozyra was creating that piece by herself, balancing on the border between life and death while struggling with cancer.

Insofar as her early works called for human morality with regard to animals, Kozyra now shows that the human being is an animal species, or in other words, a sociological chimera – doomed to co-exist with other creatures – which Haraway may have had on her mind while writing her Cyborg Manifesto. In order to survive, like every other species, they must therefore adapt to external condition: create a new society. 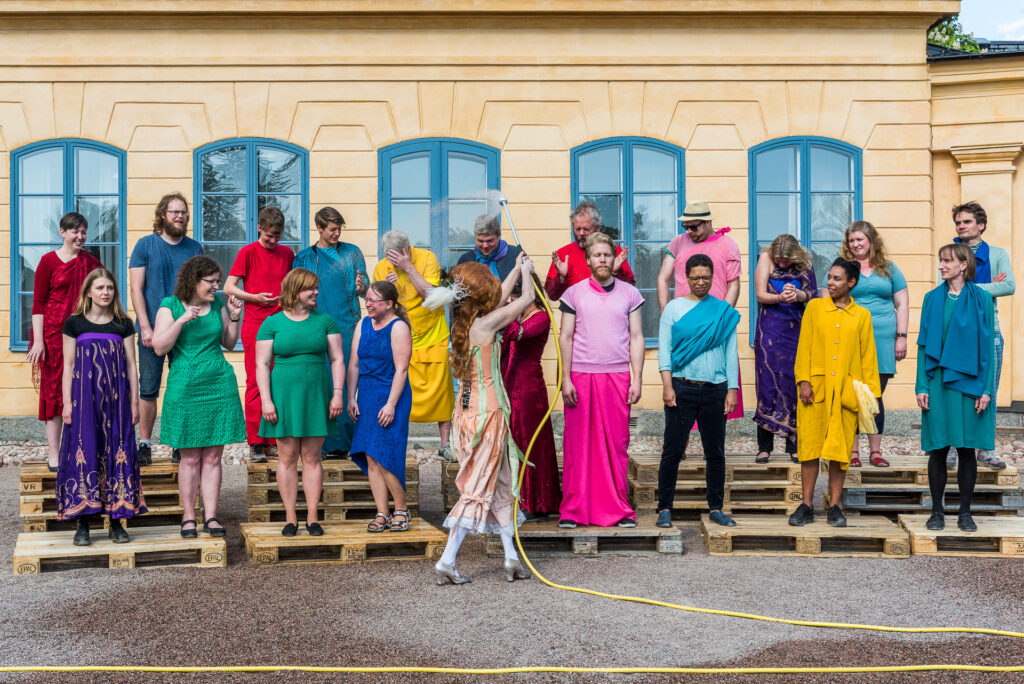 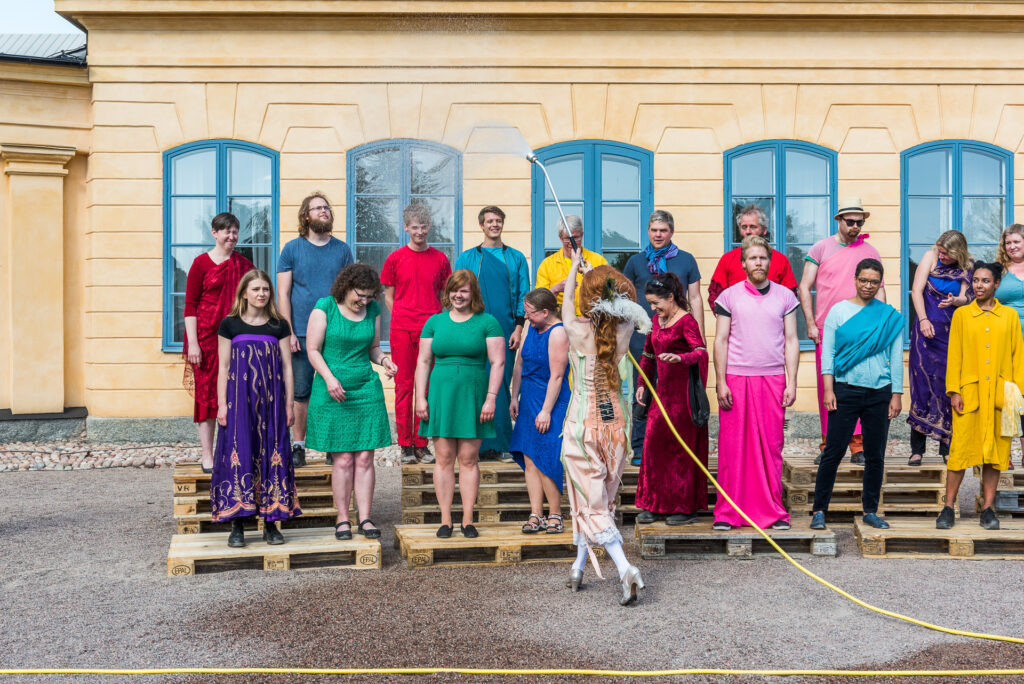 Katarzyna Kozyra acts as Elisabeth Christina von Linné, one of Linnaeus’ five daughters, an exceptionally talented figure forgotten by history, who as a woman could never take up studies, but still followed the steps of her father and became a botanist. In the gaze of Elisabeth Christina, the world is conceived in a dreamlike shimmer. The scientific writings of the father The Systema Naturae, is viewed in a distorting mirror, in a new system where the hierarchical classification of the species is reconsidered. Elisabeth Christina illustrates this peaceful revolt by conducting a choir singing Ludwig van Beethoven’s famous Ode to Joy (the Anthem of the European Union) by different animal sounds. And arranging an “Ark” of EU-pallets. Harmony, dis-harmony and noise are suddenly ended by an allegorical deluge, hinting at the climate threat and death of species.

The video art work is acquired to the Uppsala Art Museum´s art collections and was recorded in the Linnaean gardens during the international festival Revolve Performance Art Days and the annual Linnaean garden party together with the Uppsala audience in May 2018. The park itself is organized to illustrate the taxonomical system of Linnaeus. Kozyra who often relates to the spectacular aesthetics of the baroque opera, also explores the social interaction as part of the performance and art-event. The recurrent use of the artists´ persona to create performative situations, with the audience as co-creator, was underlined in the former exhibition Identity Bending, at Uppsala Art Museum in 2018. Men´s Bathhouse, Olympia, Il Castrato or Looking for Jesus. The time gap from the graduation work in 1993 in a post-communist Poland until todays Europe where right wing and conservative ideas are openly expressed, the films EU-hymn may illustrate the shaky road of today’s Europe.

curator of the A Dream of Linnaeus´ Daughter 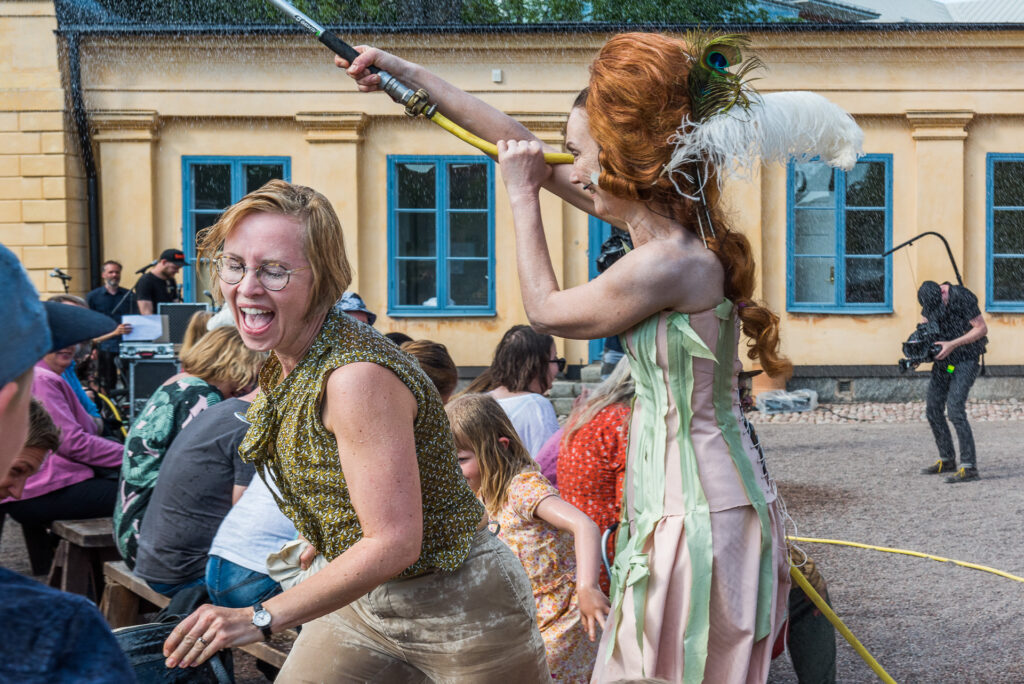