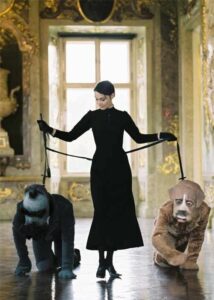 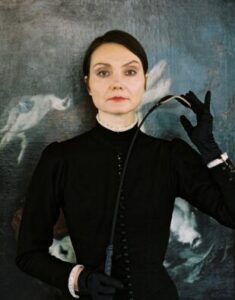 An image of artists’ friend and femme fatale Lou Salome driving a buggy drawn by Nietzsche and Ree inspired Kozyra to create a video performance and photo series for which Vienna’s Schwarzenberg Palace and Gardens served as the backdrop. As rendered by Kozyra, Nietzsche and Rilke (another of Lou Salome’s acquaintances) — or more precisely actor-dancers masked as dogs strongly resembling the philosopher and poet — are subjected to animal training. Kozyra devised her Lou Salome project while working on In Art Dreams Come True, and an interweaving of these projects is clearly perceptible. With In Art… Kozyra became a material/doll/toy in the hands of Gloria Viagra and the Maestro, who shaped her. In Appearances…, on the other hand, she is a dominatrix who completely controls her men-dogs. The closing credits scroll by with Kozyra gently humming the aria of the Queen of the Night from The Magic Flute. 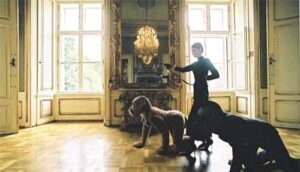 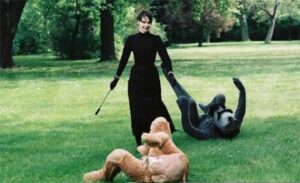