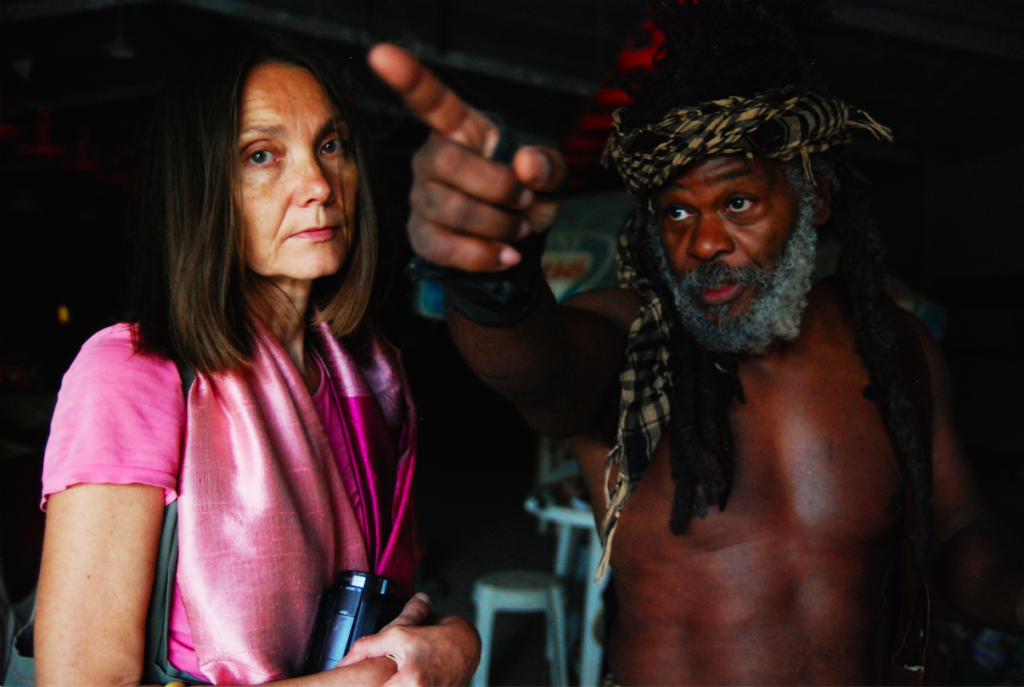 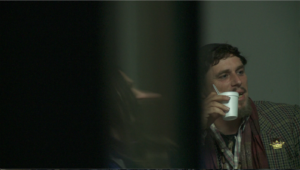 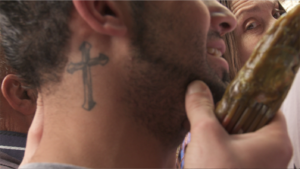 Each of her works is a memory and a reconstruction of a previous work’s segment; each previous work is an “ace up her sleeve”, ready to appear in the next piece. It is a system of interconnected modular relations, a selection based on an antiformat and deformation. Like a seasoned poker player, she always plays a card that does not fit the layout […].

„Looking for Jesus” is the latest project by Katarzyna Kozyra, whose starting point was information about the so-called Jerusalem Syndrome, an acute delusional disorder which had been reported by medical professionals only in the 2nd half of the 20th century. After visiting the Holy Land, people afflicted with the syndrome start to identify with Biblical characters – usually with the Messiah.

To date the artist has visited Jerusalem seven times in order to find those who in the early 21st century believe themselves to be Jesus. The first journey took place in 2012, thanks to the funding from a private sponsor.  The result is over 100 hours of video footage from interviews, and pictures of the city which serves as the background for religious rituals, and a scene for people of various faiths, denominations and colours, subsequent Messiahs who try to convince the artist they are miraculous and genuine, and a colourful crowd of pilgrims and locals. Kozyra witnesses an ongoing performance in which she is not the protagonist, but merely an audience attempting to find and record at least a fraction of what goes on in this sacred city. Kozyra encounters incredible personalities. Each of her heroes hides a fascinating story, and all of them combined constitute a project presenting ways and means of carrying out one’s faith, its place and role in today’s world, and values on which we build our reality. 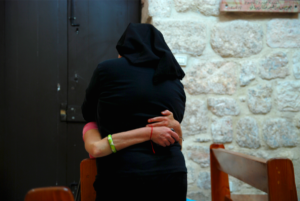 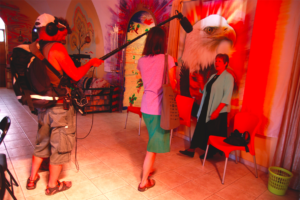 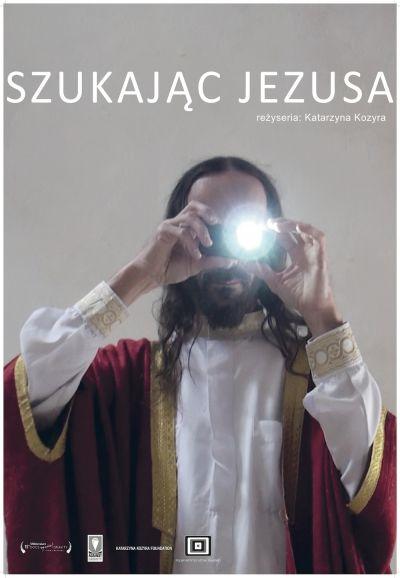 If a guy wearing dirty robes and a makeshift crown came up to you and started screaming that he was the living incarnate of Christ, chances are you’d bolt in the opposite direction. Katarzyna Kozyra, on the other hand, has spent the last few years going out of her way to find such characters and hang out with them.
The Polish artist and filmmaker has travelled to Jerusalem four times since 2012 to document people who exhibit symptoms of Jerusalem Syndrome—a strange condition in which visitors to the Israeli city develop religious-themed delusions, obsessions, and even psychosis. Sufferers “usually wash up in police custody or emergency rooms, suffering from dehydration and self-neglect of, well, biblical proportions,” wrote Sam McPheeters in a 2011 VICE feature on the condition. He went on: There are several diagnostic types of Jerusalem syndrome. There are the traditional crazies—travellers with profoundly skewed worldviews, acutely religious, who find themselves caught in Jerusalem’s psychic force field. Some come with claims that they have decoded religious secrets, such as the date of the Messiah’s return, the location of Eden or Golgotha, or the exact criteria for heavenly ascension. Others arrive to act out particularly grisly Bible passages. Many of them are practitioners of what the journal Mental Health, Religion & Culture terms “psychotic asceticism.”
Kozyra’s footage has been compiled and edited into a feature-length documentary called Looking For Jesus (…). Kozyra doesn’t focus on the idea that her subjects are mentally ill — interviews she conducted with scientists and psychologists were not included in the final cut, and it’s often not clear how far gone the syndrome sufferers are. The impression you come away with is that perhaps their conditions are linked to faith rather than madness — or that there is a thin line between the two.
I spoke with Kozyra over email about why she wanted to spend lengthy amounts of time with wannabe messiahs, and if she considers the film to be a documentary at all.

VICE: What made you want to take on this topic?

When I heard about [Jerusalem] Syndrome, I was immediately interested to meet those people afflicted. The small space between what we are and what we believe to be, has always been on my mind. Identity is something I’ve always been working on, and the identity of somebody that thinks he is closer to God than anybody else is the most interesting ever.

Do you come from a religious background?

In Poland, you can be only religious or against religion. Anyhow, you have to deal with religion… it’s impossible to ignore it. But ultimately, I didn’t create this project because of my own personal experiences with religion.

What was the most interesting thing you noticed or observed while filming? Did any story or moment stand out in particular?

One among the most interesting things I observed is the change in myself—in my approach… the shift from an interest in visual representations of Jesus to the deep belief that there is something much bigger to explore. I mean something not restricted with “patterns” I already know. For me, it’s like jumping over my own shadow.

When were you filming and how long were you in Jerusalem for? You’ve been four separate times, right? Does Looking for Jesus include footage from each trip?

That’s right. I’ve been four times now, but in the exhibition, I didn’t include footage from my last two trips. Every time I work on the extra footage for a purpose other than a gallery show, I discover new things—even from the people I met during my first journey to Jerusalem.
My approach to the subjects changes throughout the film, and there is a kind of development. I edit the meetings in chronological order, but there are also some people who appear who were already present two times prior. In the future, I will add other meetings with the same people.

How did you prepare for this project, research-wise?

We live in a fragmented world, so throughout my life, I had some information that I’ve put together, but I didn’t study on purpose. Before I started making this film, I got some lessons about religion. But the work is not about precise references to sacred books, but rather about personal experiences by people that think to be reincarnations or incarnations of saints or other sacred people.
Of course, there were some psychologists and doctors that are experts in Jerusalem Syndrome who I spoke with, but I didn’t use those interviews in the movie. The scientific side is not what interests me the most. In order to be scientific, scientists look for similarities in order to segregate, “clean,” and name things… I look for what is unique, really personal, and — because of that — heroic.

While your past work has involved filming people — sometimes without the subjects’ knowledge — do you consider this work to be more of a straightforward, objective documentary than your past video work?

I always try to be objective. The ways I get the footage if hidden or not, doesn’t make the outcome more or less objective.
I don’t have a precise recipe to make artworks. Their form depends on the subject and inspiration. Everything I was working on with Looking for Jesus is documentation of experiences. If I decide to prepare the footage I got for a documentary festival, then the outcome will most likely take a more straightforward documentary form. Anyway, what is artistic comes from the space “in-between”… from the space between objective reality and doubts about it – the more narrow space is, the more straightforward the work can be.

Can you tell me about editing this film? Postmasters’ exhibition description implies you cut up the footage to possibly skew with our perception of what is factual and what isn’t. Can you elaborate on your editing process for this film?

As I deal with so different personalities, I cannot use the same [method] of editing for everybody I met. It seems to me that every character needs to be described in his own way. I need to find a key to edit every character in a unique and most appropriate way.
For example, Sister Jostina, the woman serving God in the Syrian church, learned English in order to be able to tell her stories to tourists. She memorized the three stories she told us in English by heart and choreographed and intoned nearly the exact same way every time she repeated herself. As she wanted to give a perfect performance, she was stressed and constantly had to start all over again. This is why we thought it’s interesting to highlight that by adding the split-screen of her telling the same story especially as the Holy Spirit made her story possible.

One of the things I found interesting was when the documentary switches from documenting people who specifically claimed to be Jesus to that one man who talked about how Israel should have a political revolution. Do you consider this doc to be about general passion and fervour as much as it’s about religious fervour?

Yes, you are right, it’s also about general fervour. But even if its fervour about a political revolution, it is still about the kingdom of David. So the subject evolves around religion, regardless.
Religion contains a large spectrum of interpretation of possible persons… Also, in the history of the same religion, you got monks who were living in lonely caves, or Gotfried de Boullion going on crusades. So in the movie, you also have people that take different approaches to the idea of being close to God.

Did the people you interview exhibit consistent behaviour—besides the fact that they believed they were the messiah?

More or less… I would say yes. Only Bo, the Korean man, was somehow unpredictable. During the interview, he has an outburst and suddenly starts to say, “Do you think it’s easy for me to be selected?”
Also, Bo is the voice that’s over the edited footage from the different holy places in Jerusalem—like the Wailing Wall, or the holy sepulchre, or their surroundings. Sometimes we show Bo’s hand on the camera, but it’s a fragment of the full picture. We never show him in full, as the footage of him was taken secretly, and he doesn’t want to give an interview as [he says] it’s not time for him to appear on TV yet.

What do you hope the viewer gets out of watching this film? What reaction are you hoping for?

I hope to open horizons or to deliver doubts. Anyway, I hope to serve something more than pure entertainment. 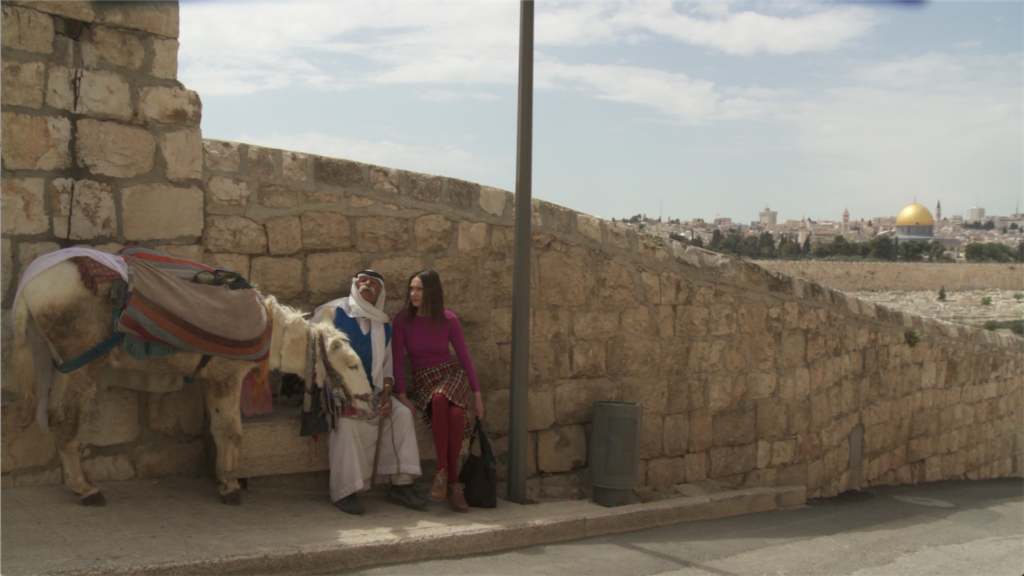 The Artist would like to thank all her collaborators and people who helped in the realisation of the project, in particular:

The project is carried out with the support of: