The work is composed of three large scale photographs and a 12 min. video. The first photograph depicts the artist as Manet’s Olympia, the second shows her on a mobile hospital bed, the third depicts an old woman. The video documents the artist being fed on a drip while undergoing her treatment for cancer. 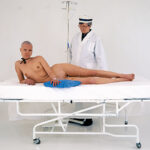 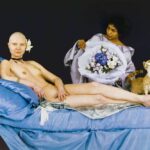 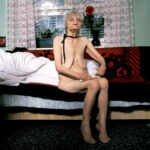 This is a very personal work and completely conscious exhibitionism. It was a reaction to the scandal around the “The Pyramid of Animals”. In reality I was incensed by the fact that I had to explain my work by becoming ill. I thought to myself: all right, if this is all so very interesting, if you publicize my privacy against my will and my convictions, then I can do the same. I can thrust forward my privacy not when someone wants to hear about it, but when I want to do so, not for the purpose of serving others, but for it to serve me, if that’s what you want that’s what you have, even if this is distasteful. (…)

For three years I functioned hooked up to an iv like others function with cigarettes or vodka. That was my reality. I lived in hospitals, outpatient clinics, radiation sections, among that minority, and maybe a majority, that suffers from illness. I war bound to medical care, depended on it as a dog depends on man.

Hodgkin’s Disease is completely curable in its first phase when it attacks one lymph node. It is removed and the site of the operation is irradiated. In successive phases it cannot be cured. It spreads to other lymph nodes and solid organs. The prognosis is bad. Most patients die within a few months or years of the first symptoms. How terrible it sounds! Words which kill. Luckily, patients do not read textbooks for nurses. Now it is treated1 – chemotherapy is administered by intravenous drip every few months for the rest of the patient’s life. The cancerous destruction is progressing within me2 – says Katarzyna Kozyra. This is her life project and her new work: Olimpia. It is made up of three enormous photographs and an accompanying video recording of the drip-feeding. In the film you can see a lot of hospital whiteness and the aseptic interior of the operating room. Slow movements of the camera are interlaced with violent ones – the pure neurosis of the frame consistent with the movement of the eye gliding over the figures of the patient and the nurse. You can see a real drip-feed with some healing fluid, inserted into the vein by a professional carer for the sick. No simulation – a fact, and not a commentary appended to a fact. The patient – Katarzyna Kozyra takes her medicine, so as not to die. A synthetic pharmaceutical preparation protecting the body, the vessels of life, from rotting and becoming maggoty. Oh, Olimpia with the stigma of a deadly disease, they have connected you to one of the ends of a System for Preserving Life on Earth. We watch a performance of reanimation – repeated every few months – another regular event apart from menstruation in the life of this woman. The operations are knots of time, events – she travels towards them throughout the preceding months. Olimpia is the diary of a chrononaut – a traveller in the cosmos of haematology. Time has lost its linear nature and is becoming knotted, made up of deeply felt moments – further drip-feeds. Each one creates a barrier to the development of the disease and keeps death at bay. A soldier was coming back from the war and he had a magic bag. Whenever he named any object and added the magic words: Into the bag! each object had to obey his command. But as he was a very old man, Death came with his scythe, saying: Say farewell to the world! The soldier replied: Death, into the bag! so of course Death had to obey. Then the soldier so violently attacked Death with a stick that he ran away, forgetting why he had come there. A Polish fairy-tale. Let us put the heroes of the tale in their appropriate places: the soldier – Kozyra, the bag – the drip-feed with the medicine, the stick – the nurse. The patient is situated between life and death. She can choose, and she does so many limes, constantly renewing the choice of life. Kozyra has at her disposal a set of possibilities for avoiding death, rational ways of conducting a discussion with death – therapy dressed up as a plan for medical treatment, e.g. intravenous drip feeding. Who knows whether we should not call Kozyra’s disease an existentialist stunt, allowing her to impose on herself a precise plan for surviving life according to a calendar of chemotherapy.

If it were not for the drip-feeds, Kozyra would have died long ago. If not for the drip-feed with the anaesthetic, the horse from A Pyramid of Animals would still be alive. Kozyra is once again exploiting death, as a material susceptible to change, able to undergo shaping operations. The disease has become for Olimpia one of the ways of surviving the world, of feeling the body, which is intensely making its presence felt through pain and dysfunction. Disease fills existence up better than health. A healthy body is insignificant, as if it were not present. The healthy hurts, constantly making its presence felt. Disease is an attraction in an extreme sense – so what if it is unpleasant” Emotions are all that count!

The eponymous Olimpia almost literally copies the configuration of people from Manet’s painting. The black serving-woman with the flowers, the chaise longue covered with an expensive cloth, the tom-cat and the sumptuous woman wrapped up only in her own nakedness, stretched out on top of an ancient couch. Here Kozyra is her, depilated with the perfection of a professional model. The body without eyebrows and eyelashes has been put on voyeuristic display to be pawed, while the gaze wanders wherever it pleases. No bodily hair protects the surface of the skin from the gaze of the viewer. Hairless as a result of chemotherapy, she presents on a plate the body which has been returned to life. In the middle of life we are in death.

Faithful to the original Olimpia Kozyra has tied around kier neck a ribbon of black velvet – the sign of a courtesan. Nowadays this kind of collar is rather associated with a symbol of authority over another body – a dog’s. Her body has been taken over by others. They have connected a drip-feed – an artificial organ with a chemical prosthetic appliance necessary for life. In Olimpia there are synthetic fluids bubbling away, in the circulatory system there is a life-giving substance made in a factory. She is an android giving a report on an incapacitation seance saying in the same breath: I am chronically, chemically dependent on you. Losing full autonomy she returns as though to infancy – she is fully dependent on others. The disease has initiated her into a state of dependence, and it allows her to cross the threshold beyond which she consciously experiences intense dependence. In Olimpia externality has violently entered, forcing us to notice the process of not being oneself – of being a patient. She has ceased being independent and must now fully depend on the experience of the doctors.3 She does not even understand the mechanism (which lay-person does”) which the medicine holding back the development of the disease sets in motion.

Hodgkin’s Disease is for her a real journey, and for the viewer a symbolic one, through the land of fear. The body is frightened, the spirit is frightened. The operating-room is a chamber of fear. Fear teaches the individual to choose the most important things, and to regard the others as rubbish. Strong fear enables the person to integrate on a different level of understanding of the world – purified of any unnecessary activities, of peripheral experiences, which had until then cluttered up the inner self. I saw once in the T.B. Institute a chap with half his lungs full of cancerous tumours: His chances of a successful operation were rated as 1:2. The chap was so fired up with the sensation of experiencing every second that he was constantly red and only conducted significant conversations. He was distilling within himself the biological and spiritual fear into some kind of heightened energy, which was widening the capillaries on the simply purple limbs sticking out of his pyjamas. A walking power station, fuelled by fear.

Kozyra iis absolutely, madly sober. She does not hide in symbols, she does not seek religious comfort. Olimpia wants to know and see. She photographs her own body, which is threatened by death, and wants to see it from the outside, to observe the process of destruction.

Another specimen is also an old and horribly wrinkled woman, with all her bones twisted by arthritis. She is shown in one of the photographs. The photograph gives our eyes a visual lesson in how to become a monster. Destruction from old age.

Kozyra’s strategy of acting depends on becoming who or what she is going to talk about. Creating A Pyramid of Animals she became each of the participants of the process of killing and exploiting the animals. She was their slaughterer and then their consumer. Olimpia is a victim. Pyramid was dangerous, Olimpia is imploring. She begs for chemical mercy. Pharmaceutical mercy grant onto us a Lord!

Olimpia is filled with a very warm content – it takes the part of hordes of ill people, crowds of patients. Kozyra has written herself into the old economy of art – the exploitation of suffering. She suffers and benefits with her hands full. The sick, the ugly, the crippled and all the other worse have found their defender and helper. The old and the horrible with their porous bodies, like thousand-year-old asphalt, have been listened to, and their pain has become a public problem. Yes, this is very much a work pro bono publico. The sick and bald body of Katarzyna Kozyra, put on public display, has given back a good feeling to all the imperfect and damaged. A pleasant mental massage.