The performance is based on Igor Stravinsky’s ballet Petrushka. There are three versions of the work: 1) performance (shown twice: at the Dance Festival at the Center for Contemporary Art Ujazdowski Castle in Warsaw, and at the Ludwig Museum in Vienna, 2001), 2) video installation (created for the Sao Paulo Biennial), 3) three colour photographs (produced for Postmasters Gallery in New York).

Performance: the six amateur dancers have been suspended on a revolving wall, three on each side. Each turn of the wall shows three boys performing 30 sec. Choreographed sequence. They copy the movements of a dancer previously recorded on video and screened during the performance. As an addition to the performers on the revolving wall, there were two old women sitting in the audience. They are topless and made-up as men: wearing beards and moustaches. Their faces attempt to express astonishment and curiosity at what is going on “on stage”. The revolving wall has been made into a video installation, shown as a separate work. 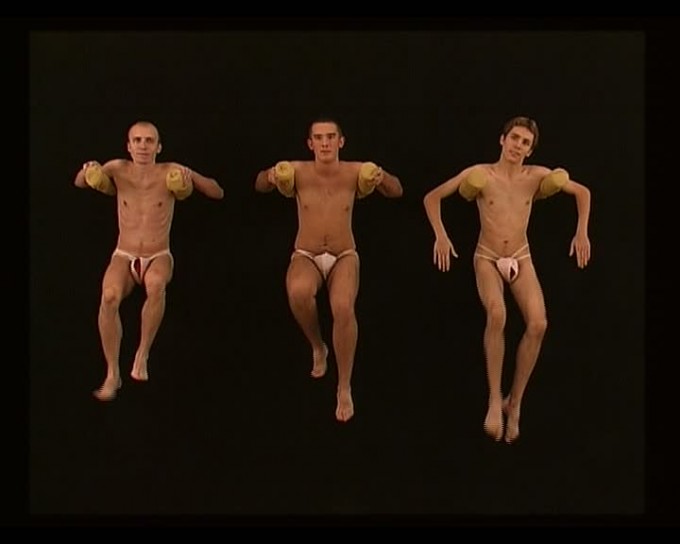 – For the past two years I’d been working with frame-by-frame animation. Since it involved dance (The Rite of Spring), I was invited to take part in a dance festival, and I seized upon the opportunity to do live animation. People suspended on a revolving wall would dance according to patterns displayed on a screen.

– I chose a dance sequence from Stravinsky’s Petrushka. In the ballet, the dancers imitate puppets so well that you feel someone’s actually pulling their strings. I liked the notion of “mechanizing” people, the idea of pinning people to the wall and animating their bodies by telling them what to do. They were meant to be puppets and move according to a fixed pattern. Petrushka was a puppet too. So I had a total of six Petrushkas: three on one wall and three on the other.

– I take it that we’re talking about your performance The Dancing Lesson. Who were the two elderly, slightly flabby ladies with beards?

– The ladies played themselves in synch with the projection they were watching on the wall. They had fake beards while the puppets on the walls had fake cunts. Once again I had reversed the roles: male puppets had cunts attached while the old ladies wore fake beards, which made them old men with tits. The way I animated them was very simple: guys sat and watched chicks jerking on the wall. Pin up girls. “Pin ups” are photos of enticing bimbos that you pin up on the wall. And my actors were pinned to the wall they were suspended on.

– People were reduced to the status of puppets…

– You could say that. Mechanizing people is interesting. Scary, too. I also did the performance as a video installation with over twenty boys taking part. The most interesting thing was that each dancer tried to break out of the schematic choreography I imposed with some kind of ad lib of their own. On the face of it they all went through the same motions but everyone did it their own way. Bits of personality shone through, scraps of individuality, shades and remnants… Some tried to get attention by stylizing the character of the puppet they played.

– Why the disguises, why the cunts? Are you making fun of guys?

– A bit, maybe. Petrushka is a cabaret, it has the Can-Can, high kicks – things that are proper to women, so I put cunts on the dancing guys. The cunts were camouflage…

If you stick a fake cunt on an old guy who’s got a beard and a mustache, you can’t tell whether it’s an old guy or an old woman. People say: “you old woman”, or “you stupid cunt.” My fake cunts are OK, they’re nice and pink.

– Not so long ago you made Boys, a film about guys climbing on the ledges inside Zachęta and generally acting primitive.

– Primitive? Natural, rather, in so far as you can be natural in such a situation. Bear in mind that these boys came there out of curiosity, to show themselves and that they really wanted to be seen.

– They act as if they were dancing…

Watching them was very interesting: whenever one of them came up with something the others would immediately follow suit. When watching the video afterwards, I felt like I was in a zoo.

There’s one more film in the series with the same boys. I arranged them on the stairs and they started dismantling them. They pulled out the rods holding down the carpet and started posing. One of them started singing into the rod, another crucified himself on it – each was a slave to a different image, emulating another role model. They milled about on the stairs until one of them pulled out a carpet rod, someone else noticed, and the next moment they were all brandishing them like spears. And then they began showing what they can do with that spear. Gladiators.

– Why are nearly all the characters in your version of Petrushka and in the short film guys?

– You need stamina to dance for several minutes when hanging on the wall. I wouldn’t be able to go through a single set; guys are simply stronger.

In the latest version of the work, new boys are wheeled in all the time, in threes. They dance their bit, then they’re out of there. The wall turns around, a new group rolls in, does its part and vanishes. They dance the set and drop out of the game. On the other side limp, exhausted bodies keep being rolled off. And they really look like slabs of meat stuck on hooks. That’s exactly it. Totally lifeless. Even when we revolved the wall they quivered until the wall stopped turning.

– Tell me something more about dolls. You’ve been taking a great interest in them lately. Why?

– Because of their fixed expression, their mimical stupor. They pretend to be human, but they’re not. And they can be animated like the puppets in Petrushka. One of the characters in the ballet is the Magician. So that makes me a Magician animating my own puppets.

– Is it fun being the Magician?

– It’s difficult persuading people to do what you want them to, if only for a moment, getting them to indulge me.

So yeah, it is nice: the boys climb up on the wall and dance their bit. That’s really neat, it makes me so happy that I even laugh out loud.

This time Kozyra’s starting point was another Stravinsky ballet: Petrushka. Its protagonist is a doll, a Russian Pierrot from a puppet show who falls in love with the Ballerina and dies at the hand of his rival the Moor. The puppets are animated by the show-master, who is a magician of sorts. At the touch of his wand they begin their strange dance, on stage at first, then jump down into the assembled crowd of vendors. The scene is a theatre within a theatre, a puppet show played out on a real stage.

Kozyra has selected the brief, thirty-second sequence that occurs immediately after the magician has brought the dolls to life when the characters are just beginning to dance, their movements still jerky and puppet-like. The sequence is performed by young dancers suspended on a revolving black wall and wearing attributes reminiscent of vaginas. Every thirty seconds the wall rotates, the music loops back to the beginning, and the whole show starts anew. The exhausted dancers rest on the back of the wall, hidden from view while three fresh ones perform the same fragment in front of the audience, and so on. The performance seems to have no beginning and no end, the wall revolves every thirty seconds always revealing fresh new actors.

The Dancing Lesson was conceived as a performance – it was shown at the Mind and Body dance festival in Warsaw in the summer of 2001 and at the Museum Moderner Kunst in Vienna later that year. It was not a classical performance: the artist attended the lesson, acting as the “magician” who rotated the wall. Nor was it a classical stage play with a plot that had a beginning, a middle and an end, and a clear distinction into stage and audience, but rather a live installation incorporating dancers, music and a video projection, played out before an audience. The boys (mostly amateurs) suspended on the wall tried to imitate the dancer flawlessly dancing the part of Petrushka on the huge video projection in front of them. After thirty seconds passed the artist and an assistant rotated the wall, and another group of boys tried to do the same dance. Two half-naked bearded women sat among the audience staring in apparent surprise at the boys on the wall, the video projection with the model dancer, and at themselves. Their images were projected live onto one of the walls of the room, so as to dominate over the audience who milled between them, the moving wall and the video projections.

The video-installation version of The Dancing Lesson is based on the same idea as the performance, though it was shot separately in Zachęta’s Mały Salon. The bearded women and the solo dancer giving a model rendition of Petrushka have gone. All that remains is the wall rotated by the artist, and the boys. There is also the element of gender change, so important in Kozyra’s recent works: transformation of the naked body into a costume. On one side of the wall the dancers, goaded on and corrected by Kozyra, the director of the show, try to perform their dance while on the other side the next group hang limply like slabs of meat waiting to restart their act when the wall revolves.