The work is presented on one big screen and seven video monitors. It explores the other side of men’s/boys’ behaviour and fascinations and shows a group of men engaged in paramilitary activities. For them, the weapons and explosives are not simply a hobby but a deep passion. Free of any ideals or ideological goals, their obsession appears primal and atavistic. The artist documents the actions and activities of this group. On one level, these resemble innocent childhood war games, while on another, due to the genuine danger and violent force of real weapons, bullets and explosives, they are closer to actual military operations. The faces of the participants are camouflaged with masks representing faces of pin-up girls or Playboy models. This softens the effect of danger and fear without depleting the authenticity and documentary character of the footage. 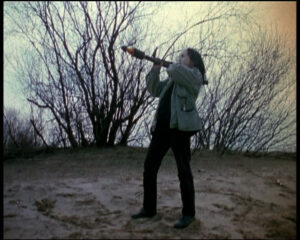 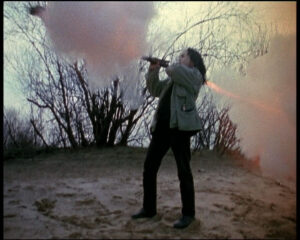 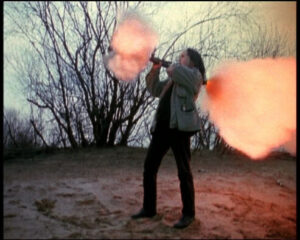 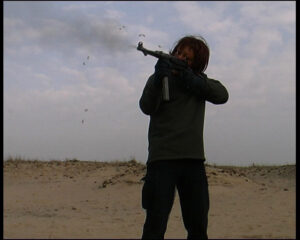 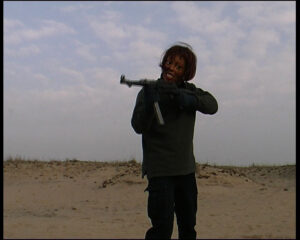 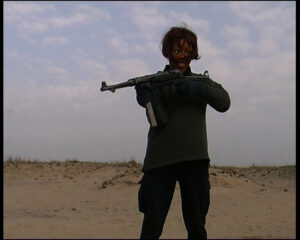 HIGH-END SHOOTING clubs and paintball warfare are popular ways for grown-ups in America to nostalgically recreate the war games they played as little kids. Kozyra’s new video installation depicts a group of Polish gun enthusiasts who have taken the game to an extreme. They spend weekends firing vintage World War II rocket launchers, machine guns, and flamethrowers at cars, buildings, and other targets they build for the express purpose of destroying – with no accompanying ideology, politics, or logic.

The title of the work, Punishment and Crime, is an ambiguous reversal of the Dostoevsky novel in which Raskolnikov’s guilt for committing a crime creates the necessity for punishment and absolution. Here, the act of destruction is itself the punishment. Here we developed the need to destroy as a result of too many movies and no real war” And does the final monitor, which shows the participants hanging in a tree like lynching victims, indicate the crime or is the crime the reality of war these weekenders simulate” Kozyra never supplies answers or resolutions.

As in her previous works – like The Pyramid of Animals in which she notoriously witnessed the death of and even killed animals, had them stuffed, and then used them in her sculpture – Kozyra is implicated in the transgressive “crime” of the act. She collaborates with her subjects, wins their trust, and stands beside them, shooting video as they fire their guns. She unflinchingly experiences and then presents an uglier side of humanity, one that we might prefer to deny the existence of, as in her bold portrait piece Olympia which showed her receiving treatment for Hodgkin’s disease.

Her ongoing engagement with sexual identity surfaces here in a gruesome twist as the participants maintain their anonymity by wearing cheap masks of girls’ faces. No other mask would cast their gender into such doubt: instead of just assuming they’re male, you are forced to search for clues in their hands and bodies. The masks are so absurd you have to wonder how she persuades them to put them on. They must have wanted to protect their identities because of fear of being identified, but doing so at the cost of losing any semblance of machismo makes one wonder if they were also desperate for the legitimizing force of any media presence or exposure. The raw power of the documentary footage is tempered by the tension of this artifice, making the action seem staged, unreal, and in some twisted way, almost empowering to women. 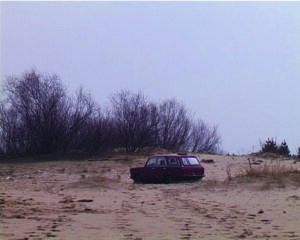 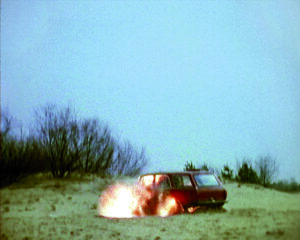 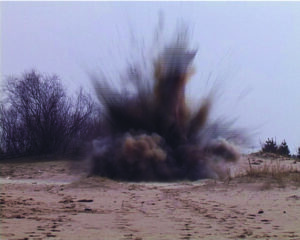 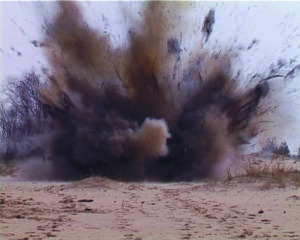 One of the most visible and successful young artists to come from post-Communist Eastern Europe in recent years, Katarzyna Kozyra turns documentary footage into confrontational, undeniable artworks lacking irony or distance. Frantiska & Tim Gilman-Sevcik chose to write about this work because of the striking senselessness of the violence it shows.

Men are from Mars

… With Punishment and Crime, things become a little more threatening, and at the same time much funnier. In Postmasters’ dark back room, a video installation documented a subculture of men who on the weekends burn and blow shit up and fire powerful guns, all for fun. They buy old cars and blow them up; they erect wooden sheds only to destroy them with explosives; they fire rounds into abandoned buildings. These hobbyists allowed Kozyra to join them and, after much persuasion, to capture their exploits on video, resulting in a parade of grenade and rocket launchers, flame throwers, automatic weapons, handguns, anti-tank weapons, and explosives. As Postmasters director Magda Sawon told me, all are World War II-era weapons the men have cleaned and restored with loving attention: “They take fantastic care of these things. They even fill their own bullet shells.” Good clean fun.

Understandably in view of the illicit nature of their activities, however, they wished to remain anonymous, so the license plate on the car is pixilated; names are cut from the soundtrack; the (presumably distinctive) ear of one of the participants is pixilated any time it comes into view, adding a visual quirk. But rather than simply blocking or pixilating their faces, Kozyra disguises them with brilliant simplicity and unsettling perversity, using plastic girly masks and long wigs. It is this gesture–along with the visceral and transgressive qualities of their actions–that links the work with Boys and, as Sawon points out, distinguishes the piece from a spate of recent anthropological video and photography of, for example, slam-dancers and snowboarders.

In a large wall projection, an incredibly satisfying three-minute video loop collaged together their “greatest hits” in explosions, fire, and gunshots. The work is superbly edited to create a powerful rhythm that never failed to induce laughter (in me at least), including also stirring, surreal passages, for example combining slow-motion images with full-speed sound. Comical notes are sounded throughout: a piece of the exploding car collides with the camera; a masked gunman wears fuzzy pink earmuffs (and if you understand Polish, you catch the dialog: mostly on the order of “wow” and “oh, shit,” according to Sawon). Meanwhile, five monitors on the floor, with headphones and remote controls accessible to visitors, document the operation at full length: assembling the shed, laying the cable, placing the explosives, setting up the targets, etc., work that is painstakingly careful and slow for obvious reasons.

In trying to parse Kozyra’s meanings, one might find oneself thinking thus: The girly masks lend anarchistic comedy, but also they challenge the male monopoly on mayhem. On the other hand, the “women” in the front room enact a violence that is totally effete…and the “women” in the back room are men, but then their “violence” is actually harmless…is their transgression really little girls’ play” Is she talking about gender, behavior, costume” In the end she seemed to say, Who cares, sit back and enjoy it.As the visitor turned to leave, though, she took in a final video on a monitor facing the others, showing a looped video of the masked men hanging from a tree. It was here that the inverted Dostoyevskyan title re-emerged: punishment for what” Is there any real transgression here”Talking to Sawon, a Pole herself, the piece becomes only more layered with meaning and resonance. “Poland is still a country that lives the Second World War,” she explained. “You can’t go out to dinner–and this is with a younger generation–without the conversation going back to the Second World War and the Jews.” In this light, the loving care the hobbyists lavish on WWII-era munitions takes on a sadder tone.

On the other hand, Brooklyn’s Polish community, of stout women with shopping bags, “here to see the evil, despicable Kozyra,” rubbing elbows with Chelsea’s gay population, there to admire the men’s bodies, provided Sawon with some of the funniest sights she’s ever seen in the gallery. Reactions were as wide-ranging as the audience demographics: outrage at the displays of violence in a world at war; confusion as to whether the two rooms represented two different artists; ogling the naked men; stunned silence at the brilliant display of firepower. And what would you expect” Work that delves fearlessly into such knotty themes as sex and violence will always elicit such varied and strong reactions. As Sawon put it, “What do you want in your art”!” 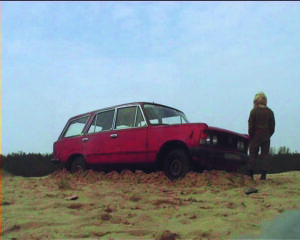 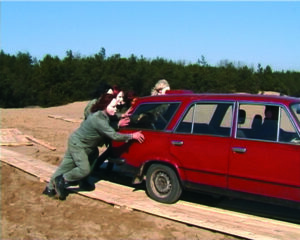