The work consists of three short videos (Ragazzi, Spears, Stairs), each 3-4 min. loop, and a series of photographs. Both videos and photos show naked young men (“dressed” only in vaginal looking thongs) posing during a photo session. Placed in front of the camera and given no specific instructions from the artist, the men are left to their own devices. 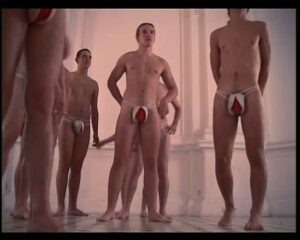 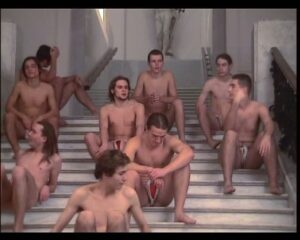 Men are from Mars – Katarzyna Kozyra at Postmasters, New York

Who, gentle Thing reader, is the best-known among the new generation of Polish artists” Hmmm…” Do you need a lifeline? Not if you attended Katarzyna Kozyra’s debut solo exhibition in New York, at Chelsea’s Postmasters. With two new projects created for the exhibition, Boys and Punishment and Crime (both 2002), Kozyra continued to explore gender, documentary and dramatic video and mediated violence. Previously, in two surreptitiously recorded video installations, Men’s Bathhouse (a prizewinner at the 1999 Venice Biennale) and Women’s Bathhouse, Kozyra observed women among women and men among men (in the latter case disguised as a man), secretly recording bathhouse patrons. She was fascinated by the different behaviours of the two sexes, for example, women’s lack of self-consciousness and, by contrast, men’s intense awareness of one another’s bodies. In 1993’s notorious Pyramid of Animals, she stacked a custom-killed-and-stuffed horse, dog, cat, and cock in a wry commentary on the food chain. The piece not only assured her infamy in her home country but also, having taken part in the animals’ slaughter, left her emotionally scarred.

To quote the artist, actually describing Men’s Bathhouse, at Postmasters she continued to study men “without their ‘protective layer,’ … without all their status symbols.” Boys, in the gallery’s front room, featured photographs and videos of a group of attractive young men, nude but for comical “inverted tulip” loincloths that imitate female genitalia. Placed before the camera without instructions, as the artist described it in the New York Times, “They acted like roosters, strutting in front of one another, flaunting their erotic readiness.” In a video shot on a staircase in Warsaw’s neoclassical Zacheta National Gallery, the men stand below a marble statue of a triton-wielding Neptune and (ahem) gently play-fight with long rods. Art- and film-historical imagery is spontaneously re-created; gender behaviours are playfully traded…

A Renegade’s Art. Of the Altogether

Transgression is a time-honoured practice in the history of art. (think of Manet’s “Olympia” or Duchamp’s “Urinal”). In the history of performance art., especially among female artists, this urge to break the rules is virtually de rigueur and often involves the artists’ naked bodies (Lynda Benglis photographing herself with a huge phallus between her legs for an Artforum advertisement in 1974; Carolee Schneemann pulling a long document from her vagina in her 1975 performance, “Interior Scroll”).

The Polish artist Katarzyna Kozyra (pronounced ka-tar-ZHIN-a ko-ZIR-a), 39, is solidly in this tradition. Take, for example, her 1999 video installation “Men’s Bathhouse,” which won an honorable mention at that year’s Venice Biennale. Ms. Kozyra, disguised as a man complete with chest hair (her breasts concealed by a towel), beard and meticulously designed prosthetic genitalia, used a camera hidden in a plastic bag to secretly film herself among the naked patrons of a Budapest bathhouse.

A sequel of sorts called “Boys”, a new three-screen installation at Postmasters in Chelsea, marks Ms. Kozyra’s New York gallery debut. In “Boys,” young men dressed only in thongs shaped like inverted tulips (a reference to female genitalia) prance around and pose in the lobby of the neo-Classical Zacheta Gallery, now the Museum of Contemporary Art., in Warsaw.

Clearly, Ms. Kozyra has gender on her mind.

For Magda Sawon, who with her husband, Tamas Banovich, runs Postmasters, Ms. Kozyra is one of the most interesting artists to come out of Poland in the last decade, if not longer. “Her work is very hard-driving, confrontational, intense, self-engaged,” Ms. Sawon said.

Ms. Kozyra was raised in Warsaw, the daughter of two economists. Her father, now dead, was also a lawyer. When asked what her family thinks of her provocative work, Ms. Kozyra said that her mother supports her efforts in every way, including financially.

Ms. Kozyra’s art. has been controversial from the start. Her first publicly exhibited piece, “Pyramid of Animals” (1993), was a sculpture of four stuffed animals (a horse, a dog, a cat and a rooster) that had been killed for the project. Ms. Kozyra said that the creatures, already scheduled for slaughter, represented for her the hypocrisy of expressing outrage over killing animals while enthusiastically eating them at home and in restaurants. She was excoriated by animal-rights activists and the Society of Polish Artists. She said that during this project, which was her graduate thesis at the Warsaw Academy of Fine Art., she had begun “to understand what I learned.” The experience crippled her artistically for a couple of years, she said.

In 1996 she exhibited photographs and a video portrait of herself posed as Manet’s “Olympia.” Bald and woefully thin, unlike Manet’s voluptuous nude, and lying on a hospital gurney instead of a silk-sheeted bed, Ms. Kozyra is seen being treated with intravenous chemotherapy for Hodgkin’s disease, which she discovered she had in 1992. “My illness was sucking me dry,” she said in a 2000 interview. “I wasn’t dying, but I wasn’t getting better either. The most important part of the work was to record myself receiving my injection. This helped me create a distance from my illness.” She is currently in remission.

Ms. Kozyra likens herself to Olympia in other ways: she is both defiant and aggressive. Her “Bathhouse” videos (she also made one in women’s bathhouse in 1997), though highly invasive, were intended not only to expose the differences in the behaviour of men and women in those surroundings (the women are very natural, not coy; the men constantly look at one another) but also to make naked men the subject of the camera’s gaze. “Why not see what men are like without their protective layer and without all their status symbols, their designer suits, their cars – naked in the baths” she asked.

Both Ms. Kozyra and Ms. Sawon, who is also Polish, credit Grzegorz Kowalski, a professor of art. at the Warsaw academy with encouraging experimentation and daring in his classes. “He is like Joseph Beuys,” Ms. Sawon said, referring to the influential German artist and teacher, who died in 1986. “He teaches his students to think expressively; that art. is about more than making objects. As a result, the students make performances and engage the human body, often shattering taboos, of which Poland has many.”

In “Punishment and Crime” another media installation to be shown at Postmasters, Ms. Kozyra films men dressed in combat fatigues and actually engaged in military games with real bullets. She ventures into the surreal by putting female doll masks on their heads.

In the end, it’s Ms. Kozyra who gets to flaunt her talent for turning the tables on those ancient co-conspirators, voyeurs and narcissists. “They are us,” she insists.